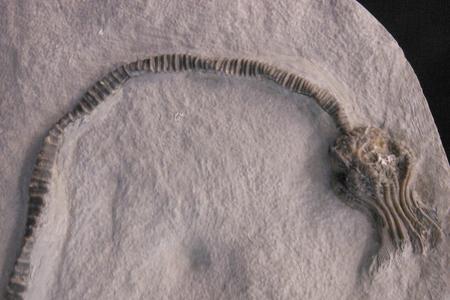 Indiana limestone and shale deposits are rich in fossil evidence that tell a story of  ancient sea life that existed over 250 million years ago.   Yet, Indiana is one of a handful of states that has not named an official state fossil.  500 Earth Sciences has partnered with other earth science and geology clubs throughout Indiana and Indiana University Professor, Dr. David Polly to select an excellent example of crinoid, the elegant crinoid, Elegantocrinus hemisphaericus, as the candidate species for Indiana Legislatures to consider for State Fossil status.

The crinoid beds in Montgomery County discovered along Indian Creek in 1836 by Edmund Hovey and his son, Horace.  Sixty three different species of well preserved crinoids have been excavated from the area including Elegantocrinus hemisphaericus.

Crinoids are Echinoderms (related to starfish and having five fold symmetry).  These plant-like animals were able to "walk" along the ocean floor to seek food or refuge.  The main body of the crinoid is called the calyx.

Meek, F.B. and A.H. Worthen, 1865. Description of new species of Crinoidea etc. from the Paleozoic rocks of Illinois and some adjoining states. Proceedings of the Philadelphia Academy of Natural Sciences, 17: 143-166.